Kamrath Picks Up Where He Left Off

After finishing last season in victory lane at the Velocity 250, Andy Kamrath started off the 2017 campaign in the very same place, capturing the victory in the 25-lap feature.

A quick caution flew in the fifth heat as Wakeling went around off turn four. Warren Paxton went for the daily double ahead of Smith, Brandon Crumbie, Phinnemore, Holmes, Stewart, DeLeeuw, Wakeling, Shave and the 23. 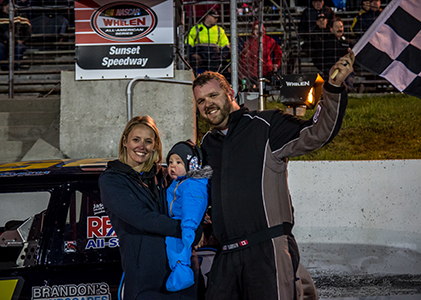 With more than 28 cars on the property, a b-main was run to set the back-half of the field, with the top-10 moving on to the main event. Dave Crumbie got to visit victory lane ahead of Woyslaw, Josh Bullen, Dunlop and Stewart. Rainey finished sixth, followed by DeLeeuw, Noseworthy, Shave, and Adams. Unfortunately, the No. 23 car fell out of the race on Lap 5.

The battle at the front of the field sorted itself out on Lap 8 as Paxton took sole procession of the lead, with Kamrath moving into second a lap later ahead of McGlashan, Nic Montanari, Butler and Yorke. Kamrath then got alongside Paxton for the lead at Lap 10, putting the No. 35 London Recreational Racing, AM Roofing, Jason Witty Re/Max, Seaton Structures, Brandon’s Landscape, Blue Mountain Honda, JF Kitching and Sons, ImageWraps.ca, and Castrol/Superclean Honda Civic out front a lap later.

Paxton slotted into the second spot ahead of McGlashan and Montanari, with McGlashan passing Paxton for second at Lap 13. Yorke tried to get by Montanari for fourth, but was unable to make the pass as the leaders made their way through lap traffic.

The restart featured a quick caution as Robinson Jr. went around in turn one.

The second restart was clean with Kamrath holding serve ahead of McGlashan and Paxton, as Yorke and Nic Montanari ran side-by-side for fourth. Montanari got the spot on Lap 17 ahead of Yorke, Butler, Daniel Montanari, Smith and Young. Brandon Crumbie slotted into 10th ahead of Bullen, Bos and Phinnemore as Fetterly and Dave Crumbie battled for 14th. The caution then flew for a third time with three laps to go as Noseworthy went up in smoke off of turn two.

The restart saw the fourth caution fly as Nic Montanari had a problem going in turn three.

Please note that this feature finish may be inaccurate so it is best to check with the track for the official results.